The flag of the city of Clarksburg as shown, was officially adopted by the resolution of the city council in April, 1923, following a city-wide contest. As to the description and meaning of the flag: The bright red, five pointed star, symbolizes the City of Clarksburg, composed of five former towns. White bars, extending diagonally, corner to corner, across a bright blue field, represent two intersecting state highways that serve the city. The bars radiating to the four corners of the flag, are likewise symbolic of Clarksburg products distributed to the four corners of the earth. 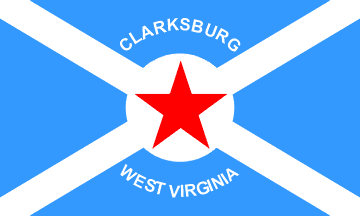 A further symbolism denotes the star of hope, with the sky as the limit. The colors red, white, and blue, suggest the national flag, as allegiance to the city of Clarksburg implies greater allegiance to the nation. They also imply that patriotism begins at home. The blue is a lighter than that in the federal flag as the skies seem brightest in West Virginia.